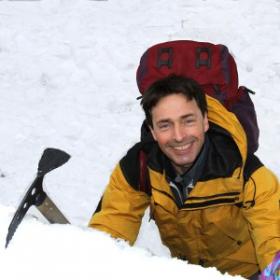 In January 2016 we welcomed a very interesting visitor to the school. Matt Dickinson is the creator of over 40 documentary films and also an author of both fiction and nonfiction. He is the twenty-seventh Briton to have climbed Everest, and the fifth to have climbed it via the North Face. He became the first British film-maker to film on the summit and return alive.

Each Year 6 class spent time with him in creative writing workshops. He used his experiences on Everest to inspire the children in different writing challenges. Year 6 worked their way up to an imaginary summit with each exercise. They were asked to place themselves on the mountain and think about how that would feel, who they would like to be with and what they would miss. The quality of the students writing was outstanding. Some of it was poignant and chilling, other pieces were hilariously funny.

In addition to these workshops, Matt shared information about Everest and other adventures such as visiting Antarctica, in two assembly presentations. Years 2 - 4 and Year 6 were entertained with films and slides plus tales from his first-hand experience.

Matt managed to inspire both staff and students to try something new, take risks and record these experiences in an engaging manner.