Richard Grant aka The Dreadlock Alien 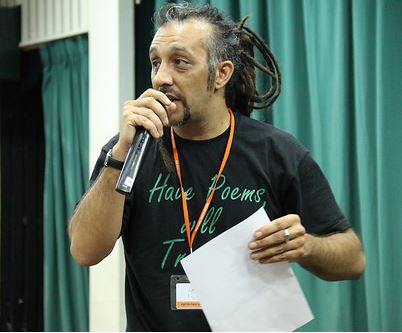 In November 2015, Alice Smith welcomed the British poet Richard Grant - The Dreadlock Alien. His poetry addresses many different social issues. He worked with all KS2 to help them create poetry that was performed during the annual Poetry Competition. You can view photos of his visit here.

Another major coup for Alice Smith this week, has been our great fortune to have Richard Grant the performance poet, aka the Dreadlock Alien,  inspire us, guide us and entertain us.

The week started with a great assembly opened by a beatboxing.

From  playing with words and meaning, beatboxing, creating soundscapes, films, costumes, generating rhythms and rhymes, to sampling and singing. Each key stage 2 class generated poems  as diverse as conflict, space, animal conservation to ‘not knowing’, Pokemon, sport, and many more!  The creativity has been immense and the freedom to take risks with their imaginations has lead to some great poems and awesome performances.

The parent workshop was equally compelling: again, taking risks, being creative and experiencing some of the activities the children themselves do on a daily basis. There was a lot of laughter and enjoyment, as well as there really being a sense of empathy and understanding. All the parents had a go at writing a poem and some were brave enough themselves to get up and beatbox, or read their poem.

We had the Poetry Slam; each group upped their game, grew in confidence and performed their socks off to an enthralled audience of parents, teachers and their classmates. The Dreadlock Alien compared in his own inimitable way and the energy was palpable.  The judges had the difficult task of choosing a winning group from each year to put through to the poetry showcase on the Friday. Each and every child in key stage 2 had an amazing week working with Richard, he was​ a great source of inspiration to all.